Its been Raining all week 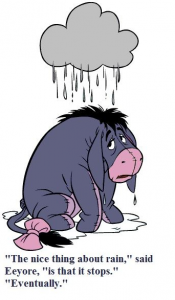 We all know someone like Eeyore.  In fact, we know people that fit into the personalities of all of AA Milne’s characters.  Pooh is “a bear of very little brain”, Piglet is scared of almost everything, Owl is wise, Tiger is full of joy, and of course Eeyore is the epitome of depressiveness.

But the beauty of the Winnie-the-Pooh stories, and something that children pick up much more readily that adults, is that the animals often surprise the reader with actions and works quite different from their caricature.  Pooh clever, Piglet brave, Owl pompous, Tiger sad.  In fact, Eeyore is perhaps the most content creature in The Hundred Acre Woods.

My favorite Eeyore story is of his birthday, when everything goes “wrong” and all he is left with is a burst balloon and an empty jar.  His friends were trying to console him, “But Eeyore wasn’t listening. He was taking the balloon out, and putting it back again, as happy as could be . . .”

The rain this week has added another layer to our spring malaise.  In times like these, I suggest that we channel Eeyore, the disinterested realist, and make the best of our circumstances.   We can all use role models like Eeyore sometimes!