Sources: Allscripts in talks to build 18-story tower at North Hills in Raleigh 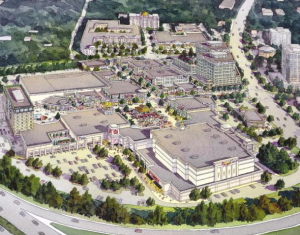 Real estate sources across Raleigh are saying that Allscripts Healthcare (Nasdaq: MDRX) is close to signing a big office lease deal to move all of its people and operations out of The Forum office park in north Raleigh to a higher profile, 18-story building at North Hills.Sources say the health care information technology company, which employs more than 1,260 people in Raleigh, has been considering either a deal to renew a contract for office space that it occupies in three buildings at The Forum or to relocate elsewhere in the Raleigh area.

Allscripts, which is based in Chicago, in 2013 restructured its lease for 304,622 square feet in the Forum II, Forum IV and Forum V buildings on Six Forks Road, according to Wake County records.

At North Hills, Kane Realty is already constructing an 18-story office tower – North Hills Tower Two – that will be completed in spring 2016 and have 300,000-square-feet of leasable office space, but real estate sources say that Allscripts is instead negotiating to have its own 18-story tower build on another site at North Hills.The North Hills master plan has three more office towers designated on the east side of Six Forks Road after Tower Two is completed.

If Allscripts does decide relocate, it would be another blow for the businesses around The Forum office park on Six Forks Road in north Raleigh. Across the street at the Colonnade office park, anchor tenant Salix Pharmaceuticals in early April announced it would lay off 258 workers in North Carolina primarily at its corporate headquarters at Colonnade, following its merger with Valeant Pharmaceuticals (NYSE: VRS).